The Effects of Rising Interest Rates

The Federal Reserve has indicated that the period of extremely low interest rates, which began with the financial crisis in 2008, was nearing an end and that it would begin to gradually raise rates. This year it increased rates a quarter point in March, representing only the third rate hike in the past 10 years, and then kept rates unchanged at its May meeting as expected. However, while the Fed acknowledged some first quarter economic weakness, central bankers maintained their earlier stance forecasting a gradual tightening of monetary policy.

The March decision was based on compelling economic data points, which indicated that the economy had met the Fed’s long-term targets of maximum employment and moderate inflation. The unemployment rate declined to 4.4%, which is the lowest level since May 2007 and suggests the economy is near full employment. Inflation also picked up, marking the first time since 2012 that inflation grew by more than 2%, exceeding the Fed’s target.

At this point the Fed appears committed to raising rates three times in 2017. This has meaningful implications for consumers and investors who have benefited from seven years of near-zero interest rates.

The Fed uses interest rates as a tool to impact economic growth by raising rates to slow the economy and lowering rates to stimulate business activity. Today the Fed is in a difficult position as it tries to balance the risks of possibly slowing the economic recovery if it raises rates too quickly, with waiting too long to raise rates and allowing the economy to overheat. As such, the Fed’s plan to gradually raise rates should provide the economy enough time to adjust to the new levels and avoid causing a meaningful slowdown in economic activity. The Fed has also taken pains to telegraph its decisions around interest rates so the market is not surprised.

Current expectations are for two additional rate increases in 2017, which would put the Fed Funds target rate at 1.25%-1.50%, still relatively low by historical standards (see chart below). Keep in mind that the Fed is continually analyzing data and may choose to hold off on raising rates if it determines that would be best for the economy. In fact, for the past two years, the Fed has announced plans for three rate hikes, but chose to only increase rates once each year based on an uncertain economic outlook. This year, while there are no guarantees, it appears that the Fed is likely to go through with its planned three rate hikes. 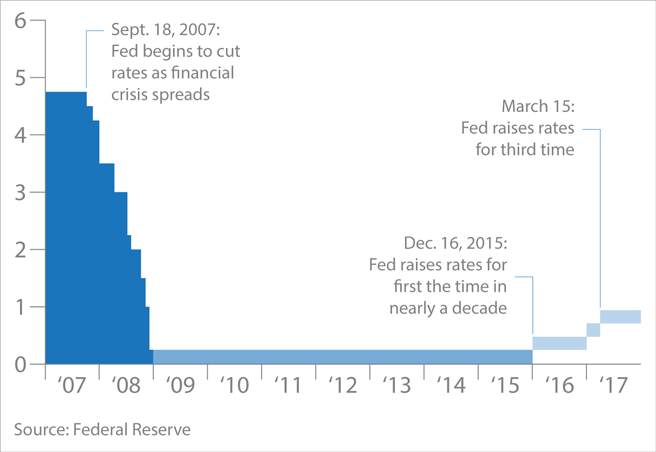 Borrowing costs will increase for consumers

For consumers, rates on everything from mortgages and credit cards to student loans will move higher. For homeowners who have adjustable-rate mortgages, these rates will reset, causing payments to go up. Higher rates will reduce the buying power for prospective homeowners, causing homes to be less affordable. Credit card rates, which are typically linked to the prime rate, will go up, as will variable student-loan payments.

Investors should benefit as interest rates on savings deposits increase, although these rates typically move up at a much slower pace than loan rates. Overall, while variable expenses will likely increase, the good news is that they are moving higher because of a solid economy. This should result in more jobs, higher wages, and increased discretionary income for consumers.

Financial sector is a likely beneficiary of rising rates

A rising rate environment typically leads to a rotation into cyclical sectors and away from those more defensive. Financials is one sector that has historically benefited from higher rates, leading to increased revenues and improved margins on loans. As rates rise, banks benefit through higher net interest margins, which is the difference between the interest rate they pay for deposits, and the interest income they receive from loans.

In a rising rate environment, banks make more from lending, particularly through credit cards and home-equity lines of credit, than they pay on deposits. For example, if rates go up 1.0%, banks typically will pass along half of the increase to their deposit clients and keep half for themselves. As the spread on net interest margins widens, revenue growth accelerates.

A rising rate environment will clearly take some getting used to as just about everyone has grown accustomed to very low interest rates. However, it is important to keep in mind that rates rise due to broad-based strength in the economy. This is good for both markets and investors. While the downside to higher rates is increased borrowing costs, the benefits of a strong economy should more than offset these incremental expenses. The economy appears to be on the right track with growing evidence that employers are hiring, consumers are spending, and businesses are making capital investments. We believe this positions the economy quite well to withstand the Fed’s plan to gradually return to normalized levels of interest rates.