How to Invest in Anxious Times

Both the bull market and economic recovery are now a decade old, which is more than twice the age of the typical cycle. Given the recent jitteriness in the market, fueled by fears over the coronavirus and general worries about the health of the global economy, some investors may be wondering if this is the best time to be putting new money to work.­­

Studies show the most important thing investors can do to build wealth is to start investing early and stay invested in the market even in the scariest times. 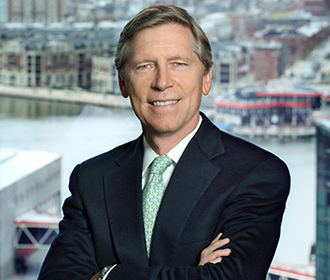 Indeed, 51% of investors polled recently by Wells Fargo and Gallup said they believe a recession could strike by the end of this year. Some investors appear to be acting on these concerns, as the amount of money flowing out of stock mutual funds and going into more conservative bond and money market funds represents the widest gap since 2008, according to a recent Goldman Sachs report.

While this type of concern is understandable, investors must understand that this is essentially market timing. Deciding not to invest in stocks because you think the market may be headed for a downturn is rooted in the assumption that the downturn will actually happen and that you are able to anticipate when the markets will turn. History emphatically proves investors are not very good market timers.

So, how can you avoid giving in to your emotions yet still feel comfortable enough to participate in the markets?

One option is to choose a time-tested method of investing called dollar-cost averaging. The name makes it sound complicated, but the strategy is actually quite simple. It’s what you do already if you invest through a workplace-sponsored 401(k) account. With a 401(k), investors have small amounts deducted from their paychecks once or twice a month, and that money is invested in the market systematically.

Think of it as a way to diversify your portfolio. Only, instead of mixing and matching the types of assets and stocks you own, you are time diversifying them to make sure you’re not paying the worst price.

It’s a hedge against bad luck. By diversifying when you invest, you’re assured of never putting all your money into the market on the worst-possible day. At Adams Funds, we know a little something about that: Adams Diversified Equity Fund began trading on Oct. 24, 1929, a.k.a. “Black Thursday,” which marked the first big market crash that ushered in the Great Depression. One of the saving graces for Adams Funds was that, being a new fund in October 1929, we were not fully invested in stocks when Black Thursday and then Black Tuesday (October 29, 1929) struck. Effectively we were dollar cost averaging.

It gives you courage to keep investing. There’s a reason why economists are known for having “predicted nine of the last five recessions”—they are often wrong when forecasting downturns. Take 2012, a year in which recession fears soared as GDP growth slipped to an annual rate of just 0.5%. Investors who gave in to those fears and headed for the sidelines missed out on the possibility of tripling their money in U.S. stocks from January 2012 to the present. Having the courage to embrace stocks is of particular importance to younger investors, as roughly three out of five millennials have no direct or indirect exposure to equities, according to the Federal Reserve Bank of St. Louis. Dollar-cost averaging is one strategy that makes it easy for millennials to tiptoe into the market.

It’s a disciplined way to buy. Ultimately, in rising markets, investors win when they “buy low.” Dollar-cost averaging can’t guarantee that you’ll buy at the absolute lowest price, but it provides the opportunity to purchase more shares of a security when prices are lower-than-average. Let’s say you have $3,000 to invest over the next six months. You could either invest all of it on the first day or commit to investing $500 into the market on the first day of each month. On Jan. 1, the shares of your stock fund are trading at $10. On Feb. 1, the price jumps to $13. But by March 1, they slip back down to $8 a share. And in April, they fall even lower, to $6 a share. Because the dollar amount you invest is fixed, what changes is how many shares you purchase. In January, you bought 50 shares of the fund. In February, 38. But in March, you picked up 62 shares, followed by 83 in April, demonstrating that momentary downturns in the market are an opportunity to get more shares at cheaper prices. At the end of six months you would have reduced risk and purchased more shares with the same amount of money. 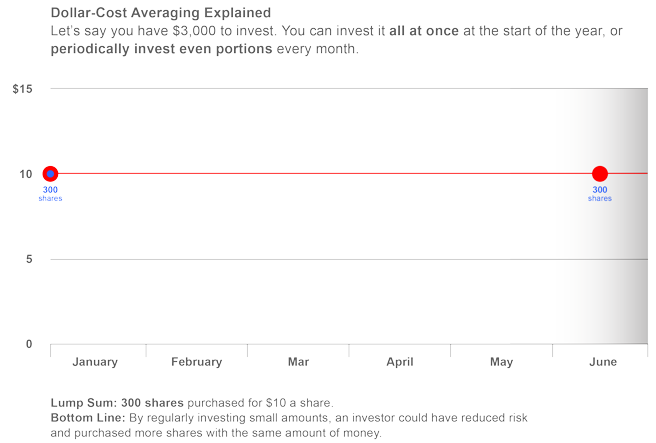 It takes emotion out of the equation. While it may seem like a mistake to set your strategy on autopilot, one of the biggest mistakes investors make is allowing emotion to drive the timing of their investment decisions. By dollar-cost averaging into the market in a disciplined way, you ensure never having to deviate from your plan even during the most turbulent times.

While investing can be complex, dollar-cost averaging simplifies the process by taking the timing and emotional aspect out of it by providing a systematic way to invest. It also allows investors the opportunity to start investing with small amounts of money and not wait until they have saved a large initial investment. By consistently committing to investing, investors do not have to worry about buying at the top because it will average out over time. Studies show the most important thing investors can do to build wealth is to start investing early and stay invested in the market even in the scariest times.