How the Rise of Netflix Has Reshaped the Media Industry

Now that consumers can get their favorite TV shows through the internet, they are cutting the cord at growing rates. Traditional media companies are scrambling to keep up with the changes, which has led to significant consolidation in the industry.

The media industry has undergone tremendous change over the past decade due to the disruption caused by on-demand entertainment. The ability to watch TV and movies anytime and anywhere has created a secular shift in how we consume media, as well as in how investors view and analyze the sector. “Cord cutting,” or the shift from traditional cable and satellite subscriptions to streaming services available over the internet, is happening faster than expected and box office sales are continuing to struggle. This has traditional media companies scrambling to keep up with the rapidly changing landscape.

No other company has been as disruptive to the industry as Netflix. Its transformation from a mail-order DVD company to a Hollywood powerhouse reflects the rapid evolution that is altering how we watch TV and movies.

When Netflix first began streaming movies in 2007, it paid fees to Hollywood studios for distribution rights. It was known as the place to watch re-runs of old TV shows such as Friends and The Office. In 2013, Netflix launched its first original show, House of Cards. The show went on to earn four Emmy awards in 2013, a first for an online-only TV series, and marked an inflection point for Netflix. The success of House of Cards gave credibility to Netflix’s ability to generate original content. The company now offers over 700 original TV shows and movies in addition to licensed content, with plans to spend roughly 85% of its content budget on original programming. 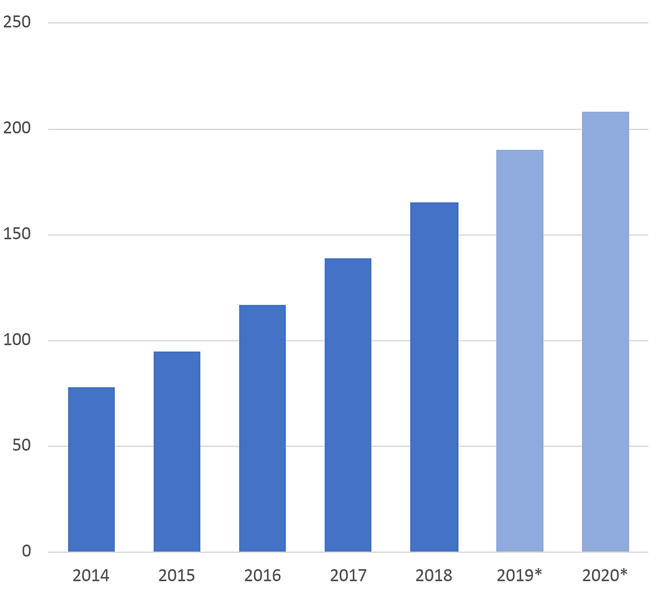 The growth in streaming subscriptions is displacing cable and satellite subscriptions. According to eMarketer, the number of pay TV subscribers in 2018 dropped 3.4% from last year, the highest rate of decline since 2010.

Looking across the sector, the drop in pay-TV subscribers has likely hit the satellite operators the hardest. DirecTV and Dish, as a result, have launched their own video-streaming services with a more limited range of channels, called “skinny bundles.” However, growth in these streaming services has not been able to offset customer losses in the core satellite-TV offerings. Cable companies are faring only slightly better thanks to the fact that they sell broadband connections, which cord-cutters need. 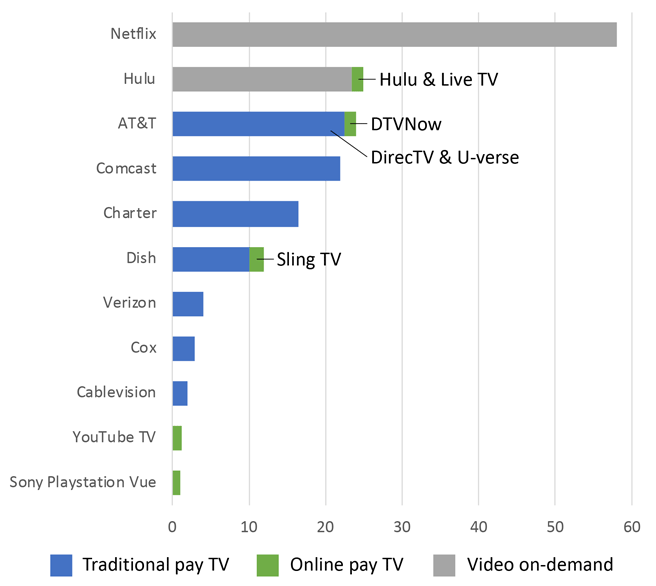 The key to Netflix’s success has been its ability to merge content with distribution. The leading streaming services today are focusing on producing original content, which has led to consolidation in the media and entertainment sector.

Disney’s 2018 agreement to buy the assets of 21st Century Fox for $71 billion underscores its effort to grow its direct-to-consumer business. This acquisition, which followed a lengthy bidding war against Comcast, also gives Disney 60% ownership in Hulu, a streaming-video services company that competes directly with Netflix. Around the same time, AT&T, the largest U.S. pay-television company (it owns DirecTV) and second-largest wireless carrier, closed on an $85 billion deal for Time Warner, which owns HBO, CNN, and Warner Bros. AT&T plans to launch streaming services in 2019 that will feature original movies and television series. And in October 2018, Comcast agreed to pay $39 billion for Sky, a European pay-TV provider that sells phone, TV, and internet services and also produces its own news, entertainment, and sports programs. The common thread across each of these acquisitions is content and a desire among the acquirers to gain direct access to customers.

Not only are traditional media players moving into streaming, so are Amazon and Google. Even Facebook and Apple are looking to add streaming services. Amazon, which has more than 100 million Prime customers, is the third most popular video-streaming service (behind Netflix and Hulu) and is also investing heavily in original programming. Google is ramping up its investment spending for original content on its YouTube TV streaming service, an online bundle of cable channels, while Facebook and Apple have set aside as much as $1 billion for original programming.

To be sure, the competition speaks to both the opportunity and the risk. While Netflix has an early-mover advantage, it is unclear if the company will be able to maintain momentum as key programming is pulled off of the platform. Disney announced the launch of its own direct-to-consumer streaming platform in August 2017 and plans to remove all of its Disney content from Netflix as part of the initiative. Netflix for its part, has committed over $10 billion toward its own original programming, and it expects to release 80 new original films in 2018. To put the company’s commitment into context, the top six movie studios combined released 75 movies in 2017.

One of Netflix’s original films, Roma, won three major Oscars this year and received 10 nominations despite major U.S. theater chains refusing to show it (it appeared only in independent theaters). The success of Roma further validates the ability of Netflix to produce quality content and could serve as another inflection point for the company.

Many industries have been disrupted by technology, and media will certainly not be the last. As consumers have been increasingly cutting the cord, traditional media companies are trying to affect their own digital transformation. Disruption, of course, brings a number of uncertainties. And while investors have gained clarity around what the evolved business model will look like, new questions will soon arise.

Already, observers are beginning to ask how many subscription services consumers could be willing to pay for and how much they are willing to spend. Even with recent price increases, Netflix costs only $13 a month, compared to $85/month on average for cable, and should allow consumers to afford more than one service. Clearly Netflix has a significant advantage at this point with its vast direct-to-consumer relationships. Media companies are scrambling to catch up, though recent consolidation in the sector reinforces the idea that even amid the changing landscape, content remains king and the winners will be those with the best entertainment offerings and strong direct relationships with their consumers.